Our Christmas Hams are special - there's no denying it. They're produced from our own free range, pasture fed pigs, and smoked in our own smoke house. Available in Whole Legs and Half Legs, we guarantee you won't buy better ham. 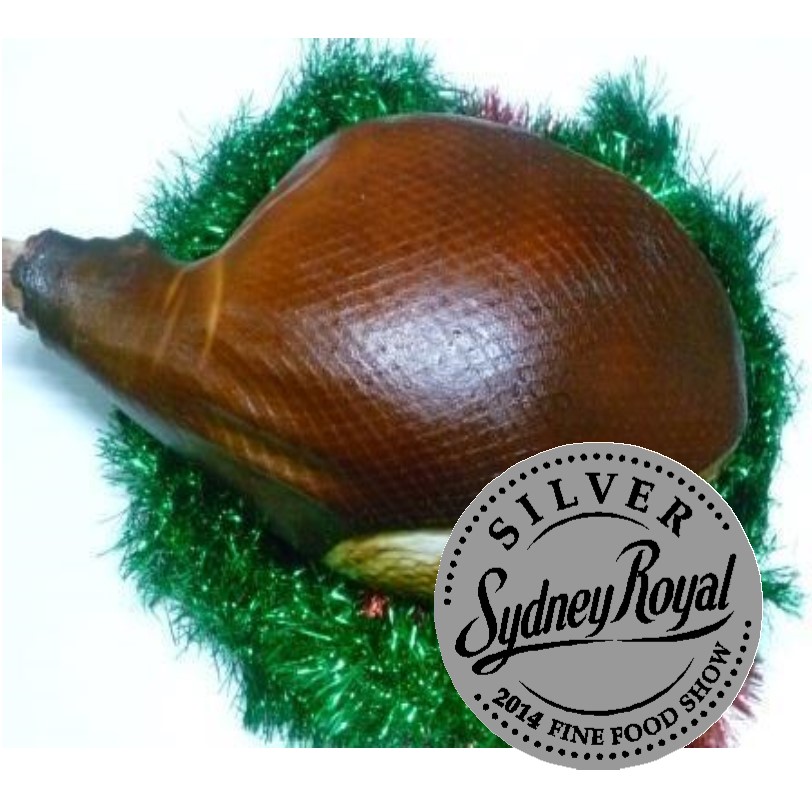 WOW. That says it all.
Posted by Ani
I bought the half leg for our Christmas lunch with husband, son (chef) and daughter in law. This was without a doubt the best ham that we have had, absolutely delicious!! We could actually taste the meat and not all the chemicals normally associated with ham products. I cooked the ham by following the recipe on the web site, so simple & tasty.
I would like to say it lasted a couple of weeks in the fridge (like hams in the past) however, we loved it so much that we ate it for breakfast, lunch & dinner and it was all gone within a few days...
Thank you to The Free Range butcher for producing such fine quality pork, we will not buy our ham from anywhere else.

Some of the best ham I've tasted in Sydney
Posted by Guy
I've bought these hams for two years in a row at Christmas and will continue to do so. Beautifully moist, tasty and smoky. In my opinion, it's absolutely worth spending the money on a high-quality ham from a happy pig. It went a long way in terms of the meat feeding people and nothing went to waste - the ham-bone made some delicious stock, and the skin lends a lovely smoky flavour to stews or home-made baked beans.

Absolutely Delicious
Posted by Stella
We have had the Pasture Fed free range ham for a couple of years now. This year I splurged on a whole ham. When it arrived I had qualms, fearing that it was too large. Need not have worried. On Christmas Day we carved a huge plateful which disappeared in seconds. They all loved it - with good reason. It was full of flavour, with a wonderful texture and looked good. As my daughter carved it she said, "This must have been a very happy pig". We are still eating it and still enjoying it.

Best Ham ever
Posted by Lynda and Simon
We had this ham for Christmas last year and thought it was the best ham ever!

Just Lovely
Posted by Margaret
We were very happy with the delivery to our door and the ham was just lovely. Thank you.

Best Christmas Ham
Posted by Joan
I was very happy with the free-range Christmas Ham - it was extra delicious. Also, it kept fresh in the fridge until finished - two weeks, then I made pea & ham soup with the bone - yum. I would definitely buy it again next Xmas.

5 Stars
Posted by Unknown
As I sit here munching on a piece of ham I can best describe it as gorgeous. It has that lovely smoked taste and there is very little fat. I don't think our ham is going to last until Christmas!

Best Ham Ever
Posted by Stellina
This was absolutely the tastiest ham we have ever had for Christmas. I cooked it using a Donna Hay recipe I saw on her TV show. It was easily the easiest and tastiest ham we've ever had.

Amazing
Posted by Unknown
This was the most amazing ham! We glazed it for Christmas and then made pea and ham soup with the bone - it was honestly the most flavoursome soup I have ever made. Looking forward to ordering another one next Christmas!

Beautiful Ham
Posted by Lauren Enfield
Thank you Ben for such a wonderful Christmas ham. It was honestly the best ham we've ever had. We had lots of positive comments about it on Christmas Day. We look forward to ordering another one this year.

Just Right
Posted by Paul Davison
The best tasting ham ever. Not too much smoke with great flavor. Kept fresh in fridge in bag for as long as it took the two of us to eat it. Gave some to friends and they said it was the nicest ham they had tasted and were going to buy some too.

Best ham ever
Posted by Anne Latter
We did't baulk at the cost as we love our free range butchers meat, the ham didn't disappoint. We glazed the ham with maple syrup, baked for about 1 hour, it was fantastic!

A Most Hamsome Christmas
Posted by Maureen Ledingham
We took a leap of faith (going on other reviews) and ordered a half leg of ham this Christmas from you. A resounding success! Not only was the ham moist and flavoursome, but we were mindful that the pig had been raised under optimum conditions by a dedicated farmer, and that certainly added to the whole experience. We enjoyed it for 14 days (and it kept really well in a moist ham bag) - so roll on the next occasion for a Free Range Ham!

Smokey, succulent, superb!
Posted by Scilla Rosenberg
We bought half a ham for Christmas this year after having one last year. I glazed it using a jar of home made Seville marmalade, brown sugar (Billingtons Molaases) mustard and a touch of vinegar.
The result was succulent. Second helpings were unanimous. The hint of smokiness added to the allure. We finished it by Twelfth Night having rationed the family. Verdict Superb!

The Best Ham
Posted by Kimerley
This is our second year of purchasing a Ham from the free range butcher and we were not disappointed.
So easy to order on line, delivered to the door in a well insulated foam box. The ham was succulent and moist.
Will be ordering again for nextxmas. Thanks

Delicious ham & lovely service
Posted by Tegan
I've bought my Christmas ham from here for the past two years and I will again this year as it is by far the nicest ham I've ever eaten!

They also provide fantastic, friendly customer service - the first year I got the ham delivered they explained exactly how to carve the ham & store it properly, as I had mentioned it was my first time hosting Christmas lunch, & the second year they asked how I had gone cooking for my first Christmas lunch last year. I was blown away by the fact they remembered this detail a year later and that they were friendly enough to enquire! You just don't receive that kind of customer service very often.

I highly recommend both the ham & this company. :-)